The park safety plan should address the need for selected cycle routes after dark.

After-dark closure of park gates is superficially attractive, but in my twenty years of walking past this park there has never been a time when people weren’t able to get in through gaps made in the fence. Maintaining that fence must be a lot of work! So the question is not whether people who want to be there can get in, but whether people who are in the park (whether through a hole in the fence or because the gates are kept open) are safe.

And, note also needs to be taken of the role of the park as a hub for active transport, both walking and cycling.

The park is also an important hub for cycle longer distance cycle routes, with heavily travelled routes radiating from the park in several directions. Many of the roads bordering the park have heavy motor traffic and insufficient space for safe cycling. This makes the park a useful place to pass through on a bike – and also, for many, it feels like a much safer place than on a road like Endymion, Green Lanes or Seven Sisters in the sections where those roads border the park. When days get short in autumn and winter this leaves many cyclists without safe routes through or past the park.

The present heavy use of the park for cycling through-routes persists despite that fact that the locations and design of entrances, and the paths through the park, are often not well set up as cycle routes: there is no route paralleling Green Lanes, the Oxford Rd bridge is too narrow, there is no good connection from Wightman Rd, and so on. There is good reason to think that cycling provision in the park can, should, and will be improved. For instance:

For these reasons, the safety plan for the park should include a small number of well-lit, all-hours routes for both cyclists and pedestrians.

Sometime back I posted a comment on the proposed housing + commercial development of the old gasworks site near Turnpike Lane. That post focussed on parking – I thought (and still think) that the site is handy enough to public transport (bus, tube, rail) and to retail services that it could, and should, be parking free. For reasons detailed below, I didn’t say anything about the failure to open the Moselle Brook (which runs in a culvert under the site) to daylight. It is time to come back to that now, and if you’re a Haringey resident I hope you’ll take the time to address this point in a response to the consultation. END_OF_DOCUMENT_TOKEN_TO_BE_REPLACED

Some of my fellow advocates of cycling infrastructure are so confident in their product that they are unafraid to display it under the slogan “build it, and they will come”, a phrase which cannot help but conjure the image of Kevin Costner hallucinating in an Iowa cornfield. END_OF_DOCUMENT_TOKEN_TO_BE_REPLACED

I’ve just had the pleasure of reading the London Borough of Haringey’s Transport Strategy 2018: Draft for Public Consultation, and also the final report for the borough’s Green Lanes Area Transport Study. Friday 22nd December – tomorrow – is the last day to comment on the draft Transport Strategy. What’s to be said?

The Strategy is full of worthy goals – improved public transport, better walking and cycling environment, reduced traffic, cleaner air. Gotta love it for that. These are all stated in extremely general terms, but a load of implementation plans are promised: a Walking and Cycling Action Plan, a Parking Action Plan, a Sustainable Transport and Travel Action Plan, and a Local Implementation Plan. Given all the virtuous aspirations expressed in the Strategy, one is tempted to sit back and wait for equally virtuous, but more specific, Plans.

This reverie of a green and pleasant Haringey lifts quickly on reading the Green Lanes report where, to pollute that image, the rubber hits the road. END_OF_DOCUMENT_TOKEN_TO_BE_REPLACED

(Short answer: no.) Hoisted from comments – in an earlier post I complained that TFL and Haringey Council were making “improvements” at Bruce Grove (that’s in Tottenham, north London) that make things worse for both buses and cycling. But some say London has too many buses. END_OF_DOCUMENT_TOKEN_TO_BE_REPLACED

Some reflections on shopping, the school run, filters, and the possibility of actual and significant traffic evaporation.

Last night I attended the first of the information sessions for the consultation on the Green Lanes Area Transport Study, and I am afraid I was not always patient. While some people become less temperate when sitting alone at a computer keyboard, but I become more so – I am better able to edit myself. So if any of the project staff who were present at the event reads this, please accept the apologies of the tallish middle-aged American bloke who was exasperated that a large study of traffic has almost nothing to say (except on the one case of Wightman Road) about traffic reduction, and limits its analysis with the assumption that the overall number of car trips is fixed.

I am an economist, and, while economists disagree with one another about many things, our fundamental starting point is that people make choices between alternatives.  END_OF_DOCUMENT_TOKEN_TO_BE_REPLACED

In my post on the Wood Green regeneration plan, I said: “There should be no private motor vehicles on Green Lanes between Wood Green and Turnpike Lane… Traffic along Hornsey Park Road and other N-S routes should be filtered, to eliminate through traffic”. In reply, Joe asks: END_OF_DOCUMENT_TOKEN_TO_BE_REPLACED 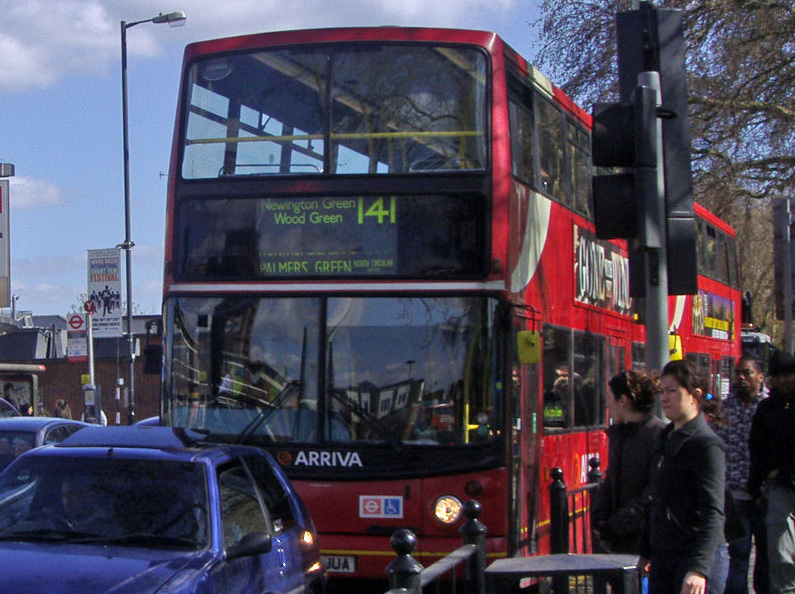 Yesterday I blogged about the severe limitations of the Green Lanes Traffic & Transport consultation. There’s a lot in the consultation, however, much of it pretty good, some of it excellent, and you should answer it. It is long, but comes in several sections (packages), and you only need to answer the ones that interest you. Here are my answers, item by item, with a bit of further explanation.

01 Improve streetscape. Support. Mostly simple inoffensive stuff, enforcing rules that already exist. In this spirit, how about also taking out those extra wide new “phone” installations on Green Lanes, which are just Trojan horses for hoardings on busy sections of pavement?

New Green Lanes area traffic consultation is now available. There are some good elements to it, worth supporting, and there are tweaks that are worth proposing. The consulation documents outline some complicated and contentious issues concerning bikes and parking on Green Lanes, and what to do with Wightman Road. Overall, however, the proposals are timid: they do not contemplate or attempt any substantial reduction in traffic, which is to say that they don’t really set out to solve the problem the plan is meant to address. Haringey surely can do much better. END_OF_DOCUMENT_TOKEN_TO_BE_REPLACED

The Haringey Council has published a set of ‘preferred options’ for Wood Green redevelopment (I’ll call it the Wood Green Plan, or “the plan”). It contains some good ideas but it stumbles badly in two key areas, and is largely silent on a third. The two areas on which it stumbles are open and green space, and road traffic. The area in which it is silent is any for of guarantee for the re-housing of people who would be removed END_OF_DOCUMENT_TOKEN_TO_BE_REPLACED