Sometime back I posted a comment on the proposed housing + commercial development of the old gasworks site near Turnpike Lane. That post focussed on parking – I thought (and still think) that the site is handy enough to public transport (bus, tube, rail) and to retail services that it could, and should, be parking free. For reasons detailed below, I didn’t say anything about the failure to open the Moselle Brook (which runs in a culvert under the site) to daylight. It is time to come back to that now, and if you’re a Haringey resident I hope you’ll take the time to address this point in a response to the consultation.The reaons I didn’t say anything then about the plan’s failure to provide for de-culverting the Moselle Brook, is that in a quick conversation on Twitter I learned that that where that stream has been brought into the open in Lordship Recreation Ground there’s a problem with smell. The reason being that, upstream, there are (or were) a number of properties running raw sewage into their storm drains – including, it turns out, one entire school. All that went into the stream. Haringey Council took a long time to do anything about it.

The good news is that the council do now have somebody whose job it is to fix this problem, and the misconnections (first of all, those involving toilets) are being cleared up. In light of that, it would be a good thing if the Heartlands project took the step of opening the brook – an option discussed in the planning proposal, but rejected because of the problem with smell.

It is worth noting that additional opening of the Moselle was mentioned as a possibility in the council’s consulation document for the big Wood Green regeneration. The Haringey Heartlands project is right next to that. Obviously the details of the Wood Green plan are now entirely up in the air for political reasons, and it would be good if the Mossele got its toe in the door with the Heartlands project, so that any future changes to Wood Green included a stream running through it.

You can answer the consultation here.

Some resources on de-culverting, or “daylighting”, urban streams can be found at

The Guardian – A river runs through it: the global movement to ‘daylight’ urban waterways 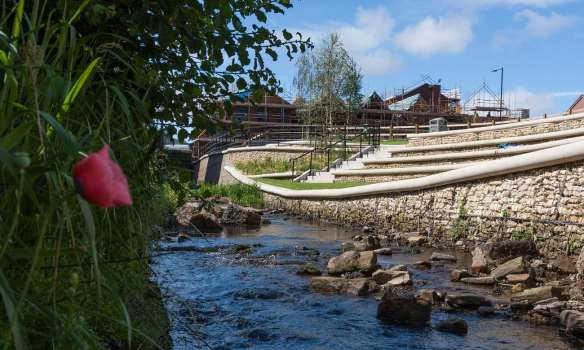